A Whole Universe Of Horror Movies 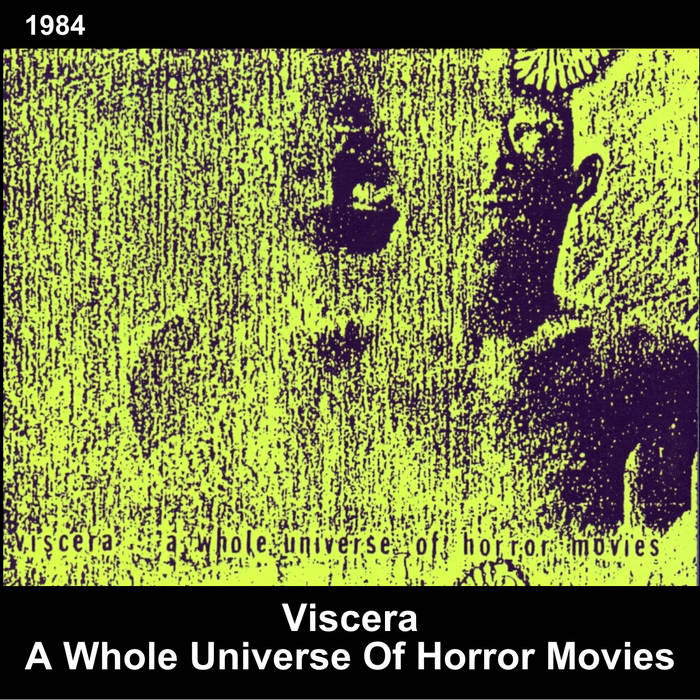 A Whole Universe Of Horror Movies was the second full length tape by Viscera, Debbie Jaffe and Hal McGee. It has always been my favorite Viscera tape, and it is the work in which our main themes reach their fullest expression. Gothic minimal synth industrial. Twisted poetic vocalizations over synth backings of Moog Prodigy and Casio MT-11, clarinet, drum machine and tape loops. It was recorded in 1983, and released in early 1984, on cassette, C55. Re-released by Harsh Reality Music in 1990.

IN A FOREIGN FILM led the listener to the brink of insanity; this cassette jumps out over "the edge". The heavily vocal-oriented, extremely minimal stylizations of Jaffe & McGee have drawn comparisons to Cultural Amnesia, DDAA, Nico, Lemon Kittens, Young Marble Giants, The Velvets and others. "The emphasis here is on the atmosphere created by first the twisted poetic words; then the music kind of takes the whole thing a step downwards into despair." (No Commercial Potential). Titles include "Honest/Dishonest", "Ugly Talk", "Juices", "Failing", "And Said Nothing", "Last Wish", "The Box Is Green" and nine others.
- January 1985 Cause And Effect Cassette Distribution Catalog
www.haltapes.com/cause-and-effect-january-1985-catalog.html

Horror Movies is also our most accessible and melodic work. Like its predecessor, In A Foreign Film, Horror Movies was mostly recorded live through a stereo microphone directly to a cassette deck. So, much of the primitive sound of Foreign Film is still here, but there is a greater refinement and confidence to the performances.
A Whole Universe Of Horror Movies is almost unrelentingly morbid, dark and dreary. Debbie and I dressed in black quite a lot, smoke and drank heavily, and generally were pretty damn depressed and morose. Horror Movies not only dwells on but revels in the dark side of the psyche.

For the Whole Universe Of Horror Movie sessions we borrowed a Moog Prodigy synthesizer from our friend Roberta Eklund, and we gave it quite a workout. You can hear Debbie playing it on the opening track, "Blank Faces Of The Others", with me on our trusty Casio MT-11, on a fog-enshrouded instrumental that sets the tone for what will follow.

All of the songs on the first side of the tape form a suite, with each piece flowing into the next one, with a sustained ominous sense of foreboding.

The second song, "Something Else Strangely Familiar", is fairly short, and another introduction of sorts. Over minimal bass synth figures I declaim a text from an advertisement we found in the newspaper. We had done this quite a lot before -- lift a mundane text from advertising and the mass media and re-contextualized it, subverting the meaning and creating an ironic twist on the intentions of the words:
"Don't guess wrong / We're not going to give you any magical or supernatural powers / All we are going to do is show you how to use a highly effective little known principle that is available to any man..."

The text of "Honest / Dishonest" came from my experiences applying for a job at a major department store in Indianapolis. They gave the applicants a personality assessment questionnaire to fill out. You were asked a number of questions about stealing and questions of honesty and character. Such as: Would you report a co-worker if you saw them stealing? Or is it all right to steal something if the value of the item is more or less than a certain dollar amount? And so on. And the survey would ask you the same questions several times with different wording -- trying to catch you being inconsistent, or trying to beat the test. The text of the song addresses the dichotomy between honesty and dishonesty, and being honest about one's dishonesty and dishonest about one's honesty. Over dreary synth drone patterns I intoned like a dark priest:
"I am honest / I am dishonest / I get high / I get low / I get dumb / I move slow / I'm an idiot; I love to steal / I'm basically dishonest / I'm wrong-minded / I got a set of totally insane ideas / I always think of myself before I think of others/ What would you do? / What in fact do you do? / You lie, you cheat, you steal ..." and so on.

"Bones Are Chairs" is the most light-hearted song on the tape, but even then it leaves the listener wondering with an uneasy feeling as to the singer's intentions. Over a crazy bagpipe-like synth figure and over-dubbed clarinet fillips, I sang my dada nightclub bit, in one of my "Monty Python voices":
"Bones are chairs spilling spilling across oceans that would invite unusable poems over for dinner / pounds and pounds of flesh / then insult them for not wearing the lapel pins that say: Yes, I am in the corner squatting squatting squatting today / My bones sing tunes that are like investments in radical smoke-tasting stocks and bonds oops crash who smile and wave at the crowds while private yes they're unwashedly reminding themselves how much much mooch they hate feminist stomping on this little insignificant little scrawny little measly little not mine, little most certainly yours / Little most certainly your penis / and that elephantitic bouncy bouncy balls in a sack with your fruits and your veggies and fruits and your veggies and fruits and your veggies, oh yeah! / Rate the yellow smack the hand that reaches for naughty things / No date no time no memorization no recitation just elbow-yanking / piss ocean qualm / We don't use that thing, and any way, somebody broke it!"

On "Ugly Talk" we do our very worst/best Throbbing Gristle imitation in an examination of political doublespeak. Over Deb's droning synth bass and primitive tape loop I intone words by Jaffe:
"This man's not happy with this beat / Doesn't say what he thinks of politics / Brother, open your throat for dead things / Say things to regret / Then bury it / Ugly talk / Approving it this morning / Running to the person who makes the laws / Running into ruining / Ugly talk / I will give you a message / Be willing to do anything it says / Be willing to talk ugly talk ..." Etc.

And from there, the mood slides further and further into the pit. Over a plodding synth figure and fluttering speeded-up drum machine pattern, I sing a tune that sounds suspiciously like "Both Sides Now" by Joni Mitchell, as sung by Genesis P-Orridge, with cut & paste words by Debbie:
"Juices / I don't know what's upside down / Do I have anything to read? / I'm nervous as hell / Punitive manslaughter / Beefed-up juices / Grab a piece of art / The wrong side vetoed out / Slid down the hill / I don't know where they landed / The governor reads the newspaper for all his information exclusive / A dumb-dumb gives off a slice form without grace / Dinner is served late today / We'll be talked about / We'll seep deep into the ground / Split pea soup, jam, purple salt, people seasoned and tart / It simmers tenderly / Two people slide together killing each other instantly... " Etc.

The text of "Failing" is a collage of writings by both Deb and me, and addresses the utter failure of the self to confront its own shortcomings, failures, and the void within. Deb's words set the tone:
"I looked around for something to believe in / I didn't find anything / Look at me saying this / I can't believe it... / Save me / God help me they said/ And all was lost/ Your character tells those around you keep away / We're all animals without repentance..."
In the bridge I cackle demonically some words I wrote about how:
"Mr. Whip gets to smacking his lips / Drooling over dead birds / I get them and strike them / Light them, you believe me? / Up all night swinging like an idiot / Fat is as fat smells and I smell death in a pot of stewed meat ..."

If that isn't morose, morbid and death-and-insanity-loving for you, the title track goes right off the edge into the abyss of self-extinction, with distinct resonances of William Burroughs and J.G. Ballard (a la Crash). The narrator has reached the point of total collapse, with no defenses and no resistance left, no more lies, no more excuses. He/she cowers in a corner waiting for apocalypse and the end of life and time:
"I want to die / I feel like I'm gonna get my wish ..."
"Acid flashback / Perverted soundtracks / Screaming and throbbing and thrashing about / Tongues lolling around in slimy holes / Does anything intelligible bloody wound in rearview mirror get away with anything? / Something like mutant meat communication / Gaps in the instinct film / Totally mad addictive behavior / Transmuted again from refrain and message to message / back again into the mass hypnotic maw / Spewing out vomit cartilage and bone ..."
Later -- "The tape is our effect / A whole universe of horror movies / The things that were destroyed with no completion / My broken nose / My broken back / Black potatoes / My black lungs / And airplane psychiatric mad religious art / Disgusting and vile / assassinate copying machine mentality! ... "

The second side of A Whole Universe Of Horror Movies opens with two short instrumentals. My "Shards" is a free improvisation exploration on piano, with lots of pounding, changes in tempo and textures. This kind of free form piano piece has cropped up again and again in my work over the years.

Many of the other songs on Horror Movies sound like they could have come from the In A Foreign Film sessions. I do my wistful introspective sounding vocal on "Changing Minds". Deb does vocals on two tracks, She does her wild screaming warbling Yoko Ono style on "Last Wish", and the long-lost lonely little woeful girl singing on a porch in the rain style on the final track, "Geometry". I take a turn at the synth and instrumentation on these. On "Last Wish" I do a particularly gnarly noisy all-over-the-place Moog part.

"The Box Is Green" is a song about the futility of the American political process and how it is too mired in money and the concerns of the wealthy and big corporations. On this one I do my Ian Curtis / blues singer imitation.

We were very proud that A Whole Universe Of Horror Movies was distributed by Aeon Distribution of Ft. Collins, Colorado, just like In A Foreign Film.

A Whole Universe Of Horror Movies is the last of what might be considered the Early Period of Viscera. Things would change drastically on Who Is This One and Hot And Cold.

For more information on A Whole Universe Of Horror Movies and Cause And Effect
www.haltapes.com/a-whole-universe-of-horror-movies.html