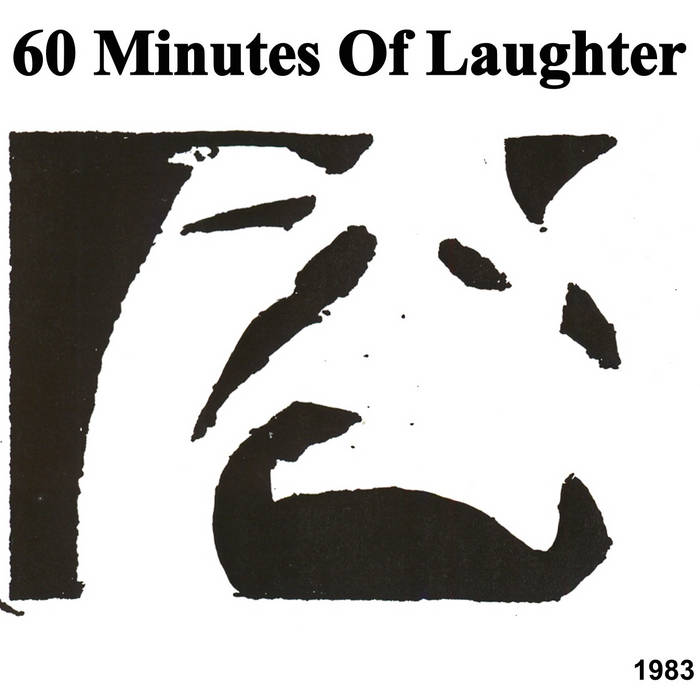 For more info on 60 Minutes Of Laughter
including additional pictures and texts
www.haltapes.com/60-minutes-of-laughter.html

Pseudo-dadaist music, noise and poetry circa 1981 and 1982 from your friends at Cause And Effect. Our biggest seller to date, 60 Minutes Of Laughter is a wacky collage of nonsense bits and non sequiturs like "Yeah, Yeah, Yeah" by Trish and the Swishettes", "Dharma Proclivity/Butchered Calf" by Jolifanto Karawane and Mipoola Palinga and "Freedom To Be Immoral" by The Conversations. Also includes early ultra-minimal music by Viscera ("Starvation And Beating", "Seeing The Future", "Outraged Civilized World", etc) and a ten-minute "Dada" performance by Karawane and Palinga in a country and western bar. For $2.00 what the hell?
- January 1985 Cause And Effect Cassette Distribution Catalog
www.haltapes.com/cause-and-effect-january-1985-catalog.html

I met Jaffe in August of 1981 while I was working as a prep cook at a Mexican restaurant in Indianapolis. We found that we shared a lot of the same interests in music, art and literature and Debbie and I became best friends. We often visited her friends Rick Karcasheff and David Mattingly, who knew a lot about weird avant garde music. They had a group called Gabble Ratchet and they played analog synthesizers, with Jack Sexson on guitar, and recorded their noisy experimental music on cassette tapes.

Debbie published a small press magazine called 12 Seconds Of Laughter, the subject of which was “the obscure, in all forms”. She took photos from foreign film catalogues, nonsense absurdist phonetic poems, cut-outs from advertisements, tracts, etc. and collaged them together to make non-statements about “love, sex, politics, psychology, religion”.

After publishing three print issues she conceived of an audio version on cassette. 60 Minutes Of Laughter was a compilation of audio routines of material by ourselves and our friends that Debbie and I had recorded on a small portable “shoebox” cassette recorder during 1981 and 1982. Deb made a collage of these recordings with various segments from poetry and language instruction records, a Wurlitzer organ, domestic audio scenes, her junior high school band and sundry sonic doodles.

Debbie and I recorded numerous simultaneous poems. We chose texts from a wide variety of sources -- our own poems, magazine articles, shopping lists, advertisements, The Bible, etc. The often arbitrarily-chosen texts clashed, collided and melted into one another.

Debbie and I read in the newspaper that a local Country & Western Music bar called The Sanctuary had an open microphone night every Wednesday. Anybody could go into the little performance area and play a song. We constructed big paper cones to put on our heads. We chose Dada names for ourselves: I was Jolifanto Karawane. Debbie was named Mipoola Palinga. We wrote our new names on the hats. I taped the words of Hugo Ball’s Dada abstract phonetic poem “gadgi beri bimba” (1916) onto my beat-up $70 acoustic guitar. We both donned long black coats. When it was our turn we donned our big tall cardboard cone-hats and walked to the stage. Deb went to the microphone on a stand stage right. I sat down in a chair in front of a boom mike lowered to my mouth level. I spoke into the microphone, addressing the audience:
“The first step is to realize you’re asleep.I mean, would it really matter if you stuck your head in a Waring blender?”
I began to rub and scrape a grooved stick against the guitar strings, pulling the stick back and forth roughly over the strings and striking the body of the guitar with my hands and the stick. I increased the speed of the rubbing and striking and abrasive scraping up to a big crescendo. I cried out in a loud voice inflected with a pseudo-Caribbean-tribal wail, stretching the phrasing out and down and around as far as I could: "Gadji beri bimba!"
Debbie took up the response in a long cascade of wails, yelps and pseudo-operatics. Our vocal lines crashed into silence.
Then I took up the next call: "Glandridi lauli lonni cadori..."
We continued this call and response of a line from Ball’s poem with Debbie providing the elements of contrast, background and setting. Debbie warbled and chirped and giggled like a maniac and screamed and bellowed out and swooped in big arcs up and down. I leaned into the microphone, coughed up the words, rolled and gargled them around in my mouth and throat and spitted and barked them out – going through a rapid-fire catalog of exaggerated phrasings, monkey chattering, accents and character voices from Monty Python and bad jungle movies.
The audience soon started to make lots of noise, with lots of loud talking and people standing up, shouting and yelling and shaking their hands and gesticulating. People yelled out their responses to what we were doing, things like: Devo!
We were up there making a bunch of racket, just yelling a bunch of stuff, and me beating and misusing and abusing my guitar. After several minutes of this chaos we brought the assault to a close and the audience burst out yelling and clapping and shouting – united together in their response to us. As we finished a guy in the audience yelled out “Heil Hitler!”. And the rest of the audience burst out cheering and laughing in agreement at the sentiment. They were clearly excited and everybody was having a good time.
We were scared and decided it would be a good idea to pack our stuff and head out the door as quickly as possible before we were attacked. Neither of us wanted to get beaten up and we didn’t think it was unlikely if we hung around much longer.

Debbie knew a guitar player who idolized Tom Petty. Deb and I tried to work out some songs, with Deb and I doing some vocals along with Roger’s hot electric playing. “Airplanes And Engines” was extracted from an epic nine-minute version. I had written a poem of several pages treating the subject of how technology, in spite of its drawbacks, will be the instrument through which we will transcend earthly, bodily limitations and enter into different realms of the spirit or consciousness. I do my very worst imitation of Jim Morrison. “Floatin’ On The Waves” was another example of how Deb and I banalized and deconstructed rock music. The excerpt here shows us reducing song lyrics to mere arbitrary sounds, with no regard to content – only to the way the words sounded together.

A couple of times that fall of 1981 we visited a waitress I knew from the restaurant where I worked. We all had a lot of fun sitting around in her house doing trio vocal improvisations – stream of consciousness – start with no preconceived idea – listen to the others – make sounds in reaction to what you hear – whatever came into our heads. Deb and I were trying to cultivate a kind of artistic infantilism, to draw closer to true uninhibited expression. We experimented quite a lot with babbling, shouting, crying, screaming, whining and giggling. We also cultivated artistic “primitiveness” in an effort to communicate as directly and instinctively as possible.

“Ant War” is a recording of me playing my cheap electric guitar through a small amplifier. I liked to misuse, abuse and overuse the tremolo and reverb effects on the amp. I was trying to create something that had a lot of energy but that evoked visual imagery. A driving rhythmic pulse, with noise in overlapping, frothing currents of distortion and crackling electricity, controlled feedback and pitch manipulation.

“Composition” was composed with a Casio VL-Tone, and is an early example of my use of programmed music. The VL-Tone was the first keyboard ever made by Casio. The VL-Tone was a hybrid calculator/musical instrument.

There are two recordings of Rick Karcasheff and David Mattingly’s experimental music group Gabble Ratchet on 60 Minutes Of Laughter. Both date from the months before I met Debbie, Summer 1981. I admired Gabble Ratchet’s improvisational style, and their use of Korg MS-10 analog synthesizers.

“Improv” is a short snippet from a much longer jam. Debbie included it here to showcase her weird stifled scream. “Collage/Gertrude Stein” is composed of a collage of pop music, news programs, TV ads and other sonic detritus, mixed completely into the left channel; and in the other speaker, a Gabble Ratchet jam tape with Deb doing readings from a book by Gertrude Stein.

Rick’s two short tracks are original works that clearly point to an infatuation many of us had at that time with The Residents. “Three Blind Pigs” is based on a traditional nursery rhyme I knew well from childhood, but in the original it was three blind mice. In Residential Rick’s world the mice become pigs.

On 60 Minutes Of Laughter Debbie Jaffe included several audio scenes and oblique references to her life that illustrated some of the themes that she would later develop in Viscera and Master/Slave Relationship. Debbie’s early life experiences caused her to doubt and rebel against common notions of romance, marriage, family, religion and popular taste.
The pieces “Husband And Wife Scenario” and “New Eyes” were from a recording Deb made of her much older half-brother Jim, his ex-wife Val talking with their church minister in 1973 in Des Moines, Iowa.

“Kurtz Kapers” was taken from a recording Jaffe made of her junior high school band in 1976. She played clarinet in the band.

When Debbie lived in Marion, Indiana she went to the Wurlitzer Electric Organ shop downtown and played the organs, which were available for rent on an hourly basis. There were cassette recorders built into the organs. Debbie took extracts from her hours of organ jam tapes for the “Wurlitzer Intermission” segments on 60 Minutes Of Laughter.

Deb got the sound effects, language and poetry records from the main branch of the Indianapolis Public Library. One of her great finds was the Gertrude Stein record that had a scratch on it that caused the phrase “sometimes Vollard mumbled” to repeat over and over. Debbie used this recording as a segue into the first Viscera piece on the 60 Minutes Of Laughter tape.

60 Minutes Of Laughter contains the earliest recordings by Viscera, from the Summer of 1982. That Summer Deb and I started developing some pieces in which I would recite, sing or act out poems and stories we’d both written, and Deb would compose a minimalist background/ backdrop or mood setting using simple instrumentation – mostly our Casio VL-Tone mini keyboard. We wanted to get right to the heart and guts of the matter of life and existence: to live and show the pain and torment of existence through the art. There was no redemption in life except for the artistic expression of our experiences. This expression must be direct and bare, devoid of artifice and rationalization, all the loose psychic wires hanging loose and going every which way. Erratic mood swings and spurts of energy followed by lassitude...our fragmented perplexed perception of the world outside and our fragile mental states.

Music we were listening to during that time included: Patti Smith, Talking Heads, The Residents, The Doors, Eno, Joy Division, New Order, Lemon Kittens, Nurse With Wound, Throbbing Gristle. Plus, we were reading lots of books on dada and stuff by William Burroughs.

Originally released by Mirth And Merriment Productions. Reissued by Zidsick.