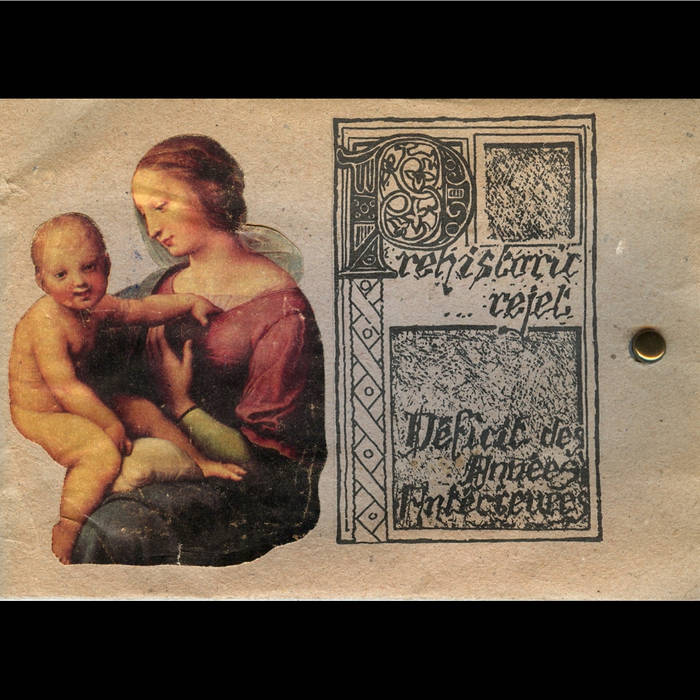 This 1983 cassette release continues D.D.A.A.'s exploration of anti-musique/submusique and their theories of the dispersion of reality. Clearly, as the name of their production company Illusion Production implies, our usual perceptions of things (time, geography, music, art) are illusion: shortsighted guesswork, ignorance of currents and change outside our normal way of thinking. We love D.D.A.A.'s use of the voice. This tape is filled with exaggerated vocal characterizations of seemingly tormented, demented souls roaming lost in a land of ever-shifting, crossing patterns of time and space. Funny, frightening tracks that also feature guitar, percussion, wind and keyboard instruments. Very medieval-sounding.
- January 1985 Cause And Effect Cassette Distribution Catalog
www.haltapes.com/cause-and-effect-january-1985-catalog.html

The Prehistoric rejet cassette is presented here in archival form with the permission of DDAA and Illusion Production.

Prehistoric rejet by Déficit des Années Antérieures was listed in the January 1985 and May 1985 Cause And Effect Cassette Distribution catalogs. It is presented here strictly for archival, educational, historical, and non-commercial purposes. All rights belong to the artist.

These recordings are straight transcriptions from an original copy of the cassette as it was published by Illusion Production in 1983. No attempt has been made to enhance or "improve" the sound quality.

Audio files are transcriptions of the entire sides of the cassette, not divided into tracks. This was done for two reasons:
1) to give the listener an opportunity to hear the sides of the tape as continuous listening experiences just as someone might have heard them if they bought the tape from Cause And Effect in 1985
2) to highlight and emphasize the non-commercial nature of this archival presentation

The main purposes here are to preserve artifacts and documents of Cassette Culture Era history, and to honor the artists and labels who produced them.

This is part of a project that I have recently commenced to thoroughly document the cassettes that were distributed and produced by Cause And Effect. I expect this project to take several years to complete.

For more information on Prehistoric Rejet and Cause And Effect:
www.haltapes.com/prehistoric-rejet.html