by Dog As Master 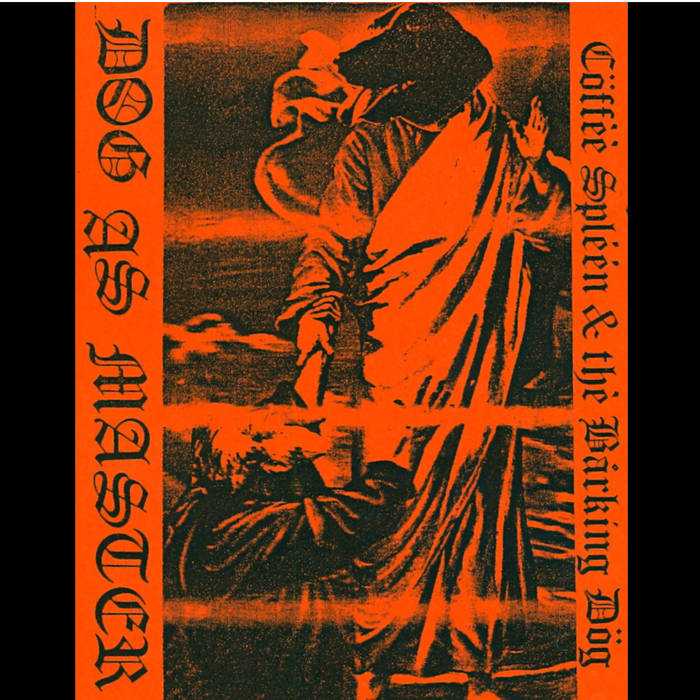 Coffee Spleen & The Barking Dog (1985) was the second cassette tape release of my solo industrial music project Dog As Master. I recorded this album during the time that I lived at 821 North Pennsylvania Street in Indianapolis, Indiana. The music was constructed with a Fostex X-15 four-track cassette recorder.

The first track of the Coffee Spleen & The Barking Dog tape is titled "Slimy Stew And Pussy Gruel", a bizarre collage with strange voices, tape manipulations, electronics, disjointed acoustic piano, percussion and screeching noise...a noisy nightmare soundtrack.
The second track is "Slash Gash Hard And Cruel", a 14-minute onslaught of distortion, feedback, and noise created entirely with electric guitar, delay and 4-track. Released on the Cause And Effect label in 1985.The first Dog As Master cassette, a C-35 entitled Coffee Spleen & The Barking Dog, consists of two delightfully-named pieces: “slimy stew and pussy gruel” and “slash gash hard and cruel.” The titles seem arbitrary, and only in it for the rhyme. Poorly recorded piano, with a melody echoing twentieth-century experiments in atonality, drives the work, which also boasts typically harsh percussive sounds wrecked through a delay box, deformed electronics, and diseased vocal treatments. With a cassette label [j-card] that could be called “The Savior Obscured By Xerography,” the tape seems to sincerely cry for an answer to the burning questions “Where would music today be without digital delays?” and “What the hell is a coffee spleen?” McGee, answerless as usual, adopts the pose of the depraved lecturer in a caffeine hangover (a familiar Nurse With Wound scenario!), achieving a recessive sonic claustrophobia with a desperately uncluttered mix. How far above McGee’s early work this is, as it approaches the true characteristics of microtonality, of atonal pitch organization! Open-ended neurotics rules the darkening day.
- Carl Howard, Artitude, 1986

Side one is “Slimy Stew & Pussy Gruel”, and it’s a bizarre tour of nightmare reality and mental confusion. Manic tape collage constructed of echo/tremolo vocals, piano doodlings, excellent tape manipulations & lots of imagination. Side two is called “Slash Gash Hard And Cruel”, and it’s a real hard-noise experience, reminding me of groups like Words Of Anger, Pacific 231, Blackhouse, Le Syndicat, and the “noise school” of modern music, but not really sounding like any of these groups directly. Distorted, grating bass rumblings with someone that sounds like a fighter plane on a divebomb run. It’s a killer.
- Brian Ladd, Objekt no. 17, 1985

Dog As Master is the solo project of Hal McGee of Viscera, whose natural abilities and inclinations have always tended toward the cinematic and soundtracks. Side One of this C35 is titled SLIMY STEW AND PUSSY GRUEL, a bizarre collage with strange voices, tape manipulations, electronics, disjointed acoustic piano, percussion and screeching noise. It is truly a nightmare soundtrack, noisy and horrifying. Side Two is SLASH GASH HARD AND CRUEL, a 17-minute onslaught of distortion, feedback and unbelievable noise created entirely with electric guitar, delay and 4-track. A perfect soundtrack for snuff and/or splatter films. COFFEE SPLEEN AND THE BARKING DOG -- all your worst fears and psychoses come to life in full, lurid, vivid color.
- January 1985 Cause And Effect Catalog
www.haltapes.com/cause-and-effect-january-1985-catalog.html